Click To Call Now (858) 216-4300 or Email Us!
Carglass1 San Diego Windshield & Auto Glass – The Many Stories a Car Window Could Tell
Previous Next

The Many Stories a Car Window Could Tell 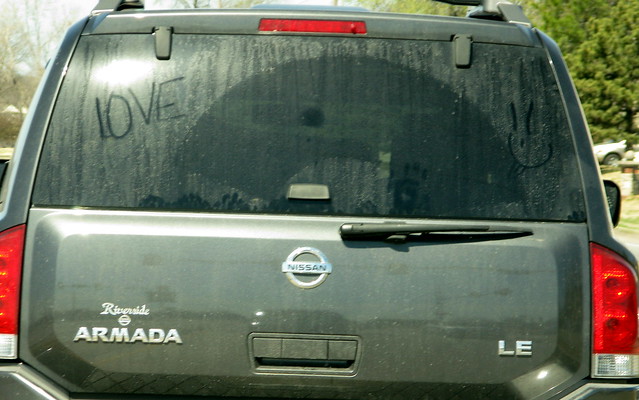 Dusty windows could just be your new medium. Photo Credits

Car windows do not only offer a view inside and outside a vehicle. It could also mean a lot of things to other people.

“Normally when people see a dirty car, the first thought is that it needs a car wash. This man however, sees an opportunity. Scott Wade, a graphic user interface designer from Texas, has an amazing talent: creating art on dirty car windows. Nicknamed the “world’s premier dirty car artist,” Wade started doodling on his family’s dirty car windows using his finger at a very young age. Wade believes that he picked up the interest from his father, who was an amateur cartoonist. As time progressed, Wade’s interest only became stronger, so he began experimenting with various brushes. He learned to create different shades of grey and black.”

Website “Gone to the Snowdogs” meantime featured pets who have been looking out the Rear Window of the car . Auto Glass Safety Council

“While waiting in the back of their car for a train to pass, Memphis decided that the car behind them was too close for comfort. This hilarious dog engages in a one-sided conversation with the car…”

This amazing story meantime, continues to perplex those who swear by the accident that had happened many years ago.
Website IJReview.com shared the story of a man who allegedly helped out a drowning woman inside the car to get out through her window, only to find out that after she was rescued, none of the windows were open.

“When investigators towed her car out of the water, they found something perplexing— all four windows of the car were closed, including the front window that Absetz reached through to grab Charlene. How he was able to get her out, no one can explain.”

Check out the video here.

It may be unbelievable but witnesses swear by what took place.

Anyway, going back to dusty auto glass windows, here is a video of the dust art by Scott Wade: